Hello!
I'd like to introduce you to some of my favorite Constellations of the Nightsky.
On these pages, you will find video capture images and sketches of the Constellations and selected Deep-Sky Objects made with various cameras and telescopes that I have owned. So, sit back, scroll down, and enjoy the 'tour'!

The 'animated' constellation graphic is from an Edmund Scientific StarWheel.

The Celestial showcase Objects within each Constellation selected using the two volume set of The "Night Sky Observer’s Guide" by George Kepple and Glen Sanner. 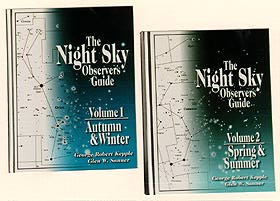