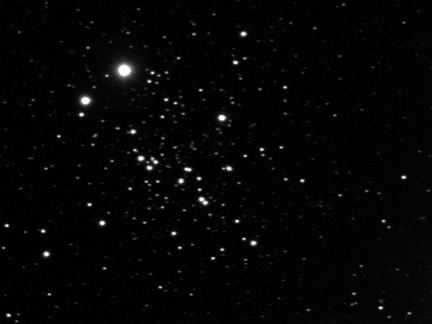 Hi,
Welcome to my collection of Open Star Cluster's.

Back in the December 2012 issue of 'Sky & Tel', they had a nice article on 'Exploring odd Named Star Clusters' that inspired me to pursue observing all of the Collinder objects. Also mentioned in the article was references to the other well-known clusters that we've all run across in our observing - Stock, King, Ruprecht, Dolidze, etc. Then recently 'Astronomy' magazine had a good article on the Trumpler clusters in their Feb 2014 issue. After a review my past observations, I realized that I had the majority of the members in the Trumpler catalog, missing only a few. I then expanded my review to the other major catalogs, using a great online observing list resource: deepskypedia and discovered I had a good start or was close on a number of other catalogs. So, after a half-dozen good nights of backyard observing over the winter of 2014, I've brought online new webpages for a number of star cluster catalogs.
Just scroll down and select a cluster catalog.

The two types of Clusters: Open and Globular
Open Star Clusters are physically related groups of stars held together by mutual gravitational attraction. As they formed together, the stars in a cluster are all of similar age, and about the same distance from us. Open cluster stars have evolved through many cycles of starbirth and supernovae, which enrich the heavy element concentration in star-forming clouds.

Open Star Clusters originate from large cosmic gas and dust clouds in our Milky Way galaxy that slowly collapse. Currently, in many clouds visible as bright diffuse nebulae within our galaxy, Star formation still takes place at this moment, allowing us to observe the formation of new young star clusters, in various stages.

Most of the open star clusters that we can visually observe are located within our own Milky-Way galaxy. After star clusters form, they continue to orbit our galaxy scattered throughout its arms and disk. Most open clusters have only a short life as stellar swarms. As they drift along their orbits, some of their members escape from the cluster and become field stars within the galaxy. There are over 1,150 known open clusters in our galaxy. Open clusters are often bright and easily observable with small telescopes.

Globular Star Clusters are physically related groups of stars held together by mutual gravitational attraction. They consist of large concentrations of stars from several 100 thousand up to a million stars tightly bound together in a relatively small area, spread over a volume of several tens to about 200 light years in diameter. As they formed together, the stars in a cluster are all of similar age, and about the same distance from us.

They originate from large cosmic gas and dust clouds in our Milky Way galaxy that slowly collapse. After star clusters form, they continue to orbit our galaxy scattered throughout its arms and disk. Globular Clusters are generally found in the outer halo around the galaxy's central disk. Of the 151 known clusters, 138 (91.4 percent) are concentrated around the galactic center of our Milky-Way galaxy in the Sagittarius / Scorpius region of the sky.

Studies of globular clusters shows that they are much lower in heavy element abundance than stars such as the Sun that form in the disks of galaxies. Globular clusters are believed to be very old and consist of earlier generations of stars which have formed from the primordial matter present in our galaxy just after its formation.


You may E-MAIL me at:lsmch@comcast.net