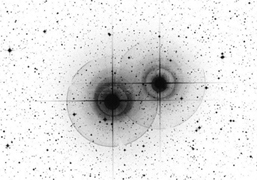 "Double Stars",,,,,,, what are they???
They are pairs or multiple stars that appear close to each other as viewed from the Earth. Some are just chance line-of-sight aligments, but others are truely gravitationally bound star systems that have two or more visible components. Many pairs display colorful contrasts and wide differences in magnitude. Double stars are generally easy to find and observe, and are less affected by light pollution. Compared to deep sky objects such as galaxies or nebula, they can be quite bright, even under moonlight conditions.

There are three types of Double Stars:
(1) optical doubles of unrelated stars that appear together by chance.
(2) visual binaries of gravitationally bound stars.
(3) non-visual binaries detected from occultations, or proper motion.

The amateur astronomer will find many Double Star's listed in star atlases and observing guides. 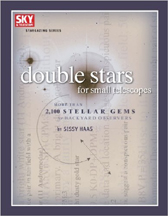 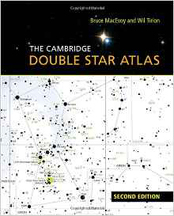 Observing visual double stars, the astronomer can determine their separation, (or angular distance), between the two component stars and their position angle. Position angle, (PA), is specifies the direction in which the stars are separated, measured from the brighter star to the fainter star. It is measured counterclockwise, from the north celestial pole. The apparent separations are expressed in arc-seconds,

In the components of a double star system, the brighter primary star is labeled the "A" star, and the secondary fainter star or companion is label the "B" star. If the system has multiple members, they are labeled continuing thru the alphabet starting with C, D, E, etc. 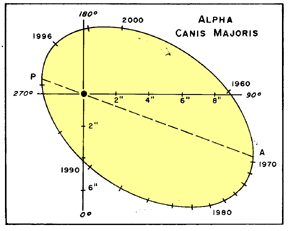 On the left side of the webpage is my personal observation list.
There are thousands of Double Stars accessable to the amateur astronomer with even only modest telescope equipment.
I currently have observed only 19 Double Stars visible from my Pittsburgh, PA latitude of around +40. (I've seen a lot more, but never recorded them)
Now I better get busy observing!